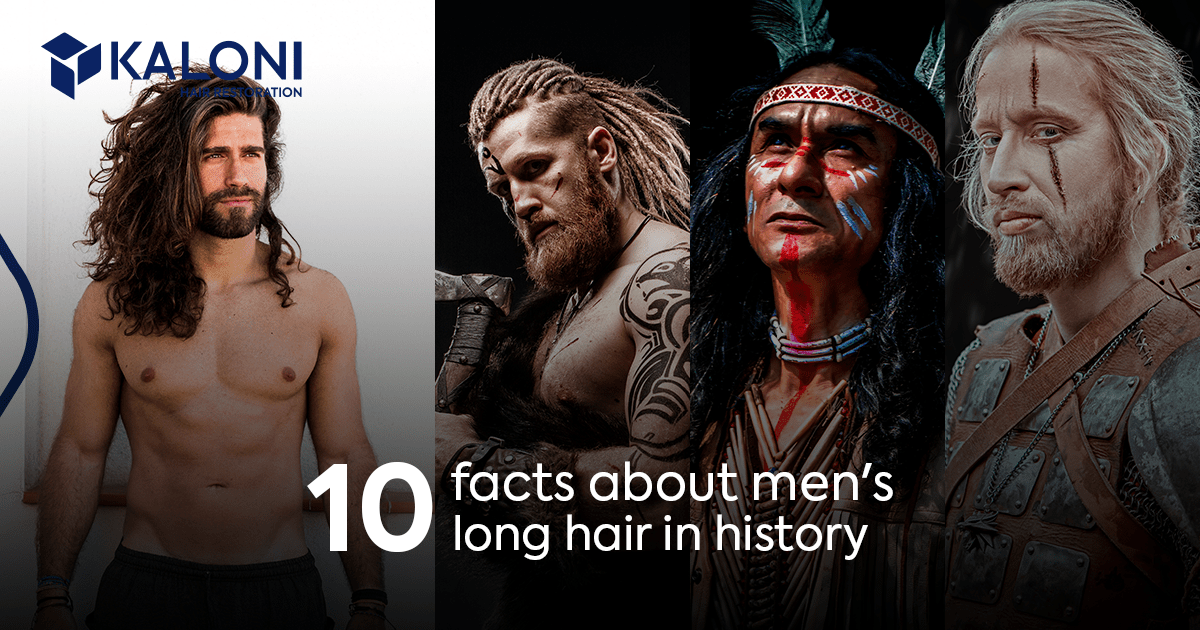 It would seem that short hair in men has been constant since the times of Julius Caesar. But biblical stories such as that of Samson, whose legend points out that he would lose all his physical strength if he cut his hair, and representations of ancient cultures show us that long hair was much more present than we think.

The reality is that men with short hair and women with long hair are a recent tradition, a modern creation that made us forget those times when long hair was synonymous with power, strength, and even freedom.

In ancient Greece, long hair was common, as shown by numerous sculptures representing their gods. Commonly the Spartan children cut their hair, but as they grew up they started to leave it long; while among the Athenian citizen’s long hair was regular to avoid being confused with slaves, who were forced to use short hair.

2. The dominance of short hair

Long hair remained in force in most of the ancient cultures, Pliny the Younger wrote that the Romans kept the long hair until the introduction of the barbershops, but it was with Julius Caesar and his invasion of Gaul when everything changed. The Roman dictator forced his soldiers to keep short hair for strategic reasons (long hair could mean a disadvantage in the battlefield) and for differentiating themselves from their enemies, who were characterized by long hair. The impact was such that today the “Julius Caesar” cut is still used.

3. The Pride of America

In the new world, it seemed that long hair was the norm. The Mexicas believed that the mollera (top of head) was associated with the thinking and the way of being of a person, so long hair protected this important part of the hair; while, among the Mayas, hair was one of the central elements of man, so cutting it was a kind of punishment. On the other hand, several native tribes of North America found in long hair a cultural identity that continues to this day.

The stereotypical image of the Nordic people consists of a muscular man with a beard, long hair, and a helmet with horns. Although it is demonstrated that this last characteristic was a medieval invention to compare the Vikings with the Devil, it is clear that the long hair was a reason for pride, as shown by Harald I of Norway, who was nicknamed “Beautiful Hair.”
To this kind of nicknames, we can add the beauty articles of the Viking period, in which it is common to find combs and diverse figures of the time that represent men with their hair up.

5. The kings with long hair

The Merovingian dynasty, which ruled in what is now France in the 5th century, distinguished by its long hair, an anomaly among the Franks of the time. The obsession was such that short hair could take a member of the royal family away from his right to the throne and even cuts were used to eliminate political rivals.

6. Regardless of the restrictions

In Eastern cultures, long hair was common for men and women with various hairstyles and styles. However, in the Edo period, it was ordered that all men shaved the top of their heads to make it more comfortable to wear helmets in combat. The restriction gave birth to Chonmage, a hairstyle in which men left their hair long and shaved their crown and which became a status symbol.

Since ancient times wigs were used to hide baldness, but in Victorian times they became a symbol of power and status. Are thought that this trend was born with Henry III of France, who started to use a wig to hide his lack of hair. However, this influence spread through the European courts, and by the Victorian era, the long white hair of wigs was a well-known trend in the English upper classes.

In many cultures, long hair is still a sign of respect and with religious implications, as manifested in Sikhism and Kesh, or the practice of growing hair as a sign of respect for God’s creation. In this Indian religion, five elements are important, among them the Kesh, a wooden comb (Kangha) with which they brush at least twice a day, and in public places, they cover their hair with a knot and a turban.

9. Long for women and short for men

Short hair started to be exclusive for men after the First and Second World War. Before these international conflicts, long hair was still common among both sexes; but the ravages in the trenches, which forced combatants to shave because of the proliferation of fleas and lice, and the figure of the soldier as an ideal of masculinity reinforced this idea. The tendency was reaffirmed with the industrial age because long hair could mean danger when operating machinery.

The sixties were a decade of disobedience, and one of the ways to go against the grain was to let your hair grow, thus ending the ideal of the fifties. In the music, the Beatles and the Rolling Stones led the trend, while in the American counterculture, the hippies adopted a style that directly confronted authority. The rebellion was expressed in other groups as a form of pride, as in Black Power, where long hair played a key role in expressing the love for blackness that for years was denied.